Liana and I are standing in the doorway of the hall looking out at the rain. The sun shines through the rain and the rain keeps falling. I say, “Monkey’s wedding”. Liana looks at me, “I haven’t heard that expression before?”
“It is something we say in Africa when the sun is shining the same time the rain is falling.”

Saying, “Monkey’s wedding” is a quaint memory from my childhood. It is something I taught my own daughter and my granddaughters too. It isn’t something one deliberately sets out to ‘teach’ but one of those sayings that children pick up because you use it in a certain identifiable situation. It is a colourful phrase that appeals to children – that appeals to people of all ages. The image of a monkey bridal couple complete with fluffy white dress and flowers, top hat and tails, sparks the imagination. 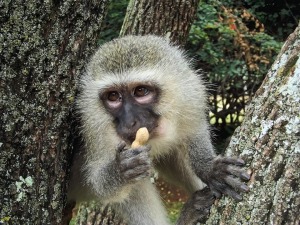 It has never entered my head that Australians don’t say, “Monkey’s wedding” when the sun shines through the rain. We have so many expressions in common but this one has slipped past the keeper. I wonder if it is because there are no monkeys native to Australia? I’ve had a look at Google and Wiki. It seems that the original phrase comes from the Zulu language – “… a loan translation of the Zulu umshado wezinkawu, a wedding for monkeys”. There is also a link to Portuguese casamento de rapôsa – vixen’s wedding – which then changed to casamento de macaco – monkey’s wedding. 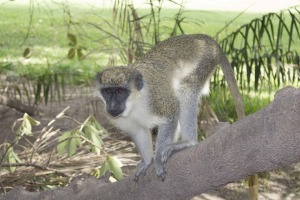 The term ‘Sunshower’ seems to be the most commonly used expression in various parts of the world. Topically, The Word Detective says that in “In New York we used to say, “The Donald is fixing his hair”. Whether that is the POTUS Donald or not is a moot point!

There are so many places I could go with this blog entry. For example, Johan Huizinga in Homo Ludens and the instinct of play that nourishes so much of our philosophy. But that will turn this into a Sociology essay and bore most people witless. So, I’ll leave it here and just say … Next time you see the sun shining through the rain try saying, “Monkey’s wedding” – it’s guaranteed to make you smile.

I think this is a funny picture – the little dog looks so happy. It is also something to look at while I write this blog. My sister sent it to me but I don’t know where she got it from.

We have emptied the rainwater tanks and cleaned out the one we use for drinking water, now we wait for rain again. The rocket I planted is looking a bit sad. I was hoping to have some while the family were here last week but it isn’t big enough to harvest. There are still a few tomatoes left that the birds (twenty-eights) have left for us. The veges at the local store are sometimes OK but not always very fresh. I guess that is one of the drawbacks living rural.

I came back from Perth on Monday and brought Bessie (Kath’s dog) with me. She hyperventilated until Donnybrook and then she settled down. She does smell a lot, especially her breath and her farts. I’m more used to Stella who is quite nice smelling except when she has been rolling in something disgusting like dead fish.

When I got home, the family had already arrived and that was just as well. When Roland got home (he had been fishing) he had hurt his leg on the transom of the boat. Kath dressed it for him. I’m glad I didn’t have to use my rusty first-aid skills (although I did the course earlier this year). That is one of the problems getting older, one’s balance can be dodgy. I do the Tibetan Rites every morning to keep myself balanced – in more ways than just physical! The Rites segue nicely with the asana work I do each day.

About the procrastination, well, I’ve got a pair of yoga pants that need to be hemmed and I have been meaning to fix them since I got back from Perth … I keep thinking of other things to do, like writing drivel in this blog!