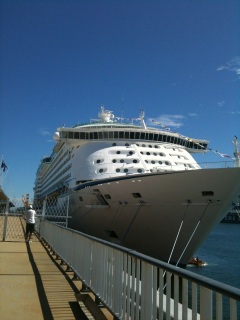 Voyager of the Seas is a massive cruise liner. Over 3,000 passengers and nearly 1,500 crew. We (Roland and I) embarked at Fremantle on 9 March. Can you imagine the logistics required to get 3,000 people on board?

Kath and the girls took us to the wharf. The ship towered above the buildings, a great, white palace. Lily was determined not to be impressed and told us, in no uncertain terms, “It is just a little boat.” Kath told me later that she had wept all the way home and then lay on her bed crying, “Granny, Granny!”

Once on board the first event was Life-boat drill. We saw people at the Life-boat drill and never saw them again the rest of the cruise! By the same token, some people we saw every day and some people we saw for the first time when the ship docked in Singapore two weeks later. This is one of the mysteries of cruising on a gigantic ocean liner … I think that many passengers spend their whole time in the casino. Others keep roughly the same schedule as we do and we bump into them all the time. Some folk are confined to their cabins due to illness or other reasons.

Some passengers are just more noisy and it is difficult to miss them. One group played cards next to the adults-only pool every day and you could hear them a mile away. The deck of cards they used were not like any I’ve ever seen before (I had a good look when I walked past). I wasn’t cheeky enough to ask about the cards and anyway the card players did not seem to speak much English. The three swimming pools were popular as were the many whirlpools (spas). I swam a few times although the water was overly warm and not really refreshing – plus crowded with fairly large people who swim right over the top of people my size. I didn’t venture into any of the spas – too crowded and unhygienic for me (that’s because I once saw someone squeezing their pimples while sitting in the spa – I suppose the heat of the water opens the pores? Still, makes me feel nauseous).

There were plenty of children on board and they seemed to enjoy the swimming pools most of all. The children were well catered for all round. In the cabin next to us were 4 young children and they were so  well-behaved. I complimented their father when I saw him and he was well pleased and surprised! I asked him if the children had fallen out of the bunk-bed but it turned out they had been jumping off the top bunk and that is what I could hear!

Our cabin was on the lowest level, deck 2, so we had 170 steps to climb to the main buffet restaurants on deck 11. The first couple of days we were puffed but soon picked up fitness. Using the stairs instead of the lifts has a double benefit (as explained to me by my sister Annette) First, you don’t get sneezed and coughed over, thus avoiding flu and colds; secondly, your weight doesn’t sky-rocket. The food on board was excellent and heaps of it. I even succumbed to eating some sweet puddings, something I don’t normally do. Luckily I found the scales in the gym! Another benefit of using the stairs was being able to see the excellent selection of art on each landing; tapestry, sculpture, photographs and paintings.

Rest and relaxation were the main pastimes also reading, sleeping and exploring the ship. The Ship’s Library was not as well-stocked as expected but I read 3 or 4 books during the cruise. The gym offered stretch and abs classes first thing in the morning that I attended regularly as well as doing my own Yoga practice. Apart from that I played on my iPad, looked at the view and generally kicked back. Calm seas and warm (hot) weather.