This Census-Taker by China Miéville

It is a long time since I have read a book from beginning to end and then from the end back to the beginning. This book astonishes me on every page. So much of the story is in the spaces. How skillful is an author when what is not written has the power to captivate the reader?

Recently, I mentioned to someone that China Miéville is an acquired taste and I hold to that. There is not much I can say about this novel; the skill of this author is extraordinary. Ursula K Le Guin says about his writing, “[Miéville’s] wit dazzles, his humour is lively, and the pure vitality of his imagination is astonishing.”

Another thing, I do enjoy a book that challenges my vocabulary. There are a number of words in this book that do that very thing. I’ve listed two here, together with the meanings and the context in which they appear in the story.

I am forever grateful to my niece, Heather Shearer, for introducing me to China Miéville’s work many years ago.

vatic | ˈvatɪk | adjective literary describing or predicting what will happen in the future.

In context: There was supposed to be a holy old woman or man living in a cave no more than an hour’s walk from our door, just below the zenith, and I remember once glimpsing the beat of a brown cape like a shaken sheet but whether that cloth was worn on bony vatic shoulders I can’t say. I can’t even say if I truly saw it.

revenant | ˈrɛv(ə)nənt | noun a person who has returned, especially supposedly from the dead

In context: Did my mother walk ahead of me? Even when she told stories of her earlier life she never seemed nostalgic and I could think of no reason that death alone would change that. If she took that revenant route it might be she had no choice, that she had to pass through those familiar failing suburbs to scatter cats and go without a shadow past their hides in the roots of walls and carts sat so long wheel-less on their axles that they were less than landscape.

View all my reviews

When we lived in Bicton, Roland used to buy old paintings or prints at the swap meet. Kath and I decorated one or two of these with little drawings and sometimes we cut up old photographs to stick on. I did one of Roland fishing; it was a really small photo from way back. I cut out around the edges of his figure (with great care) and stuck it on a large, dismal looking print of a lake. Kath added a few things too, over time. No one noticed except children who visited us. They thought it was magical that we could be in the framed prints! Roland used to hang them on the back verandah of the Bicton house. I wonder what happened to them?

I also made a birthday card for Stavros, many years ago when he was still very young, and pasted portrait photos of the family on it – once again I cut them out very carefully from old photos. Martine said he really liked it. I found a bookmark that Stavros made for me and I treasure it. 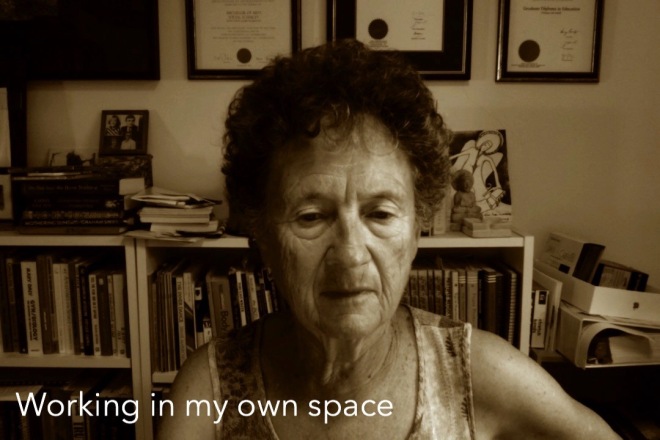 Gulp: Adventures on the Alimentary Canal by Mary Roach
My rating: 5 of 5 stars

It is a dull day when we don’t learn something new. Gulp presents us with a new something at the turn of every page.

My Goodreads friend, Ann Logan, recommended Mary Roach’s books to me and now I am searching for them. Roach is an entertaining and educational writer. Her lightness of touch belies the scientific research behind the stories. I do admit to thinking (occasionally) “Too much information!”. However, as the cover blurb says, “… her trademark laugh-out-loud style …” kept me reading on.

I was particularly interested in the different fads that have happened over the centuries. Some of these are covered in graphic detail. This brings to mind some of the trends that are happening right now. For example, the notion of ‘cleansing’ by using juices (that deny the body essential vitamins) and so on and so forth.

I have read and reviewed Giulia Enders book, Gut subtitled ‘the inside story of our body’s most under-rated organ’. Enders also writes in an easy-to-read and informative manner. Both authors are happy to share personal experiences in an informal way and this makes things more easily understood and much less distasteful.

I hope that these books allow readers to be more accepting of this integral part of our biology. After all, the gut needs to be recognised for the important part it plays in our health and wellbeing.

View all my reviews