Today at the shops, I saw a young woman with a tattoo that brought back a few memories. The tat was of seams up (or down) the back of her legs finishing at her ankles in a pretty scroll. 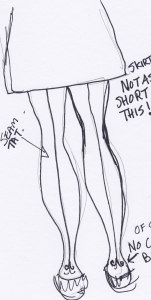 In the days when women wore nylon stockings with seams, it was a battle to get the seam to run straight up and down (or down and up) one’s legs. Add to this the likelihood of snagging the sheer nylon fabric – usually on a rough nail thereby starting a ladder. Quickly, out with the colourless nail-varnish to stop the run from ruining the stocking. Do you remember?

One benefit of stockings was, if you did ladder one, you only had to replace one. That was if you happened to have one in the same denier and the same shade. Nylon stockings were expensive so this was seldom the case – hence the use of nail-varnish at both ends of the run. Naturally, the nail-varnish went through the stocking and the stocking then stuck to your leg.

Stockings stayed up, most of the time, because of a suspender belt. I’ve just Googled ‘suspender belts, images’ and I have to say the modern suspender belt looks nothing like the chastity belt style that we used to wear! The fashionable suspender belt now is, possibly, only available from an Adult Store. They still don’t look very comfortable and the feminist in me says they are more for the “male gaze” (as per John Berger, Ways of Seeing.) Nevertheless, I found this image and if you can extrapolate a thick, unattractive cotton instead of the rather fetching lacy garment pictured, you’ll get the idea.

At the girls-only Anglican Church school that I attended in the 1950s, we were required to wear thick lisle stockings, the colour of toffee, especially on a Sunday. Lisle stockings are not particularly suited to the subtropical climate of Africa. They were decidedly uncomfortable and invariably sagged and bagged around the ankles. Indeed, these were not the ‘sexy’ fashionable nylon stockings beloved by the women during the Second World War. Neither were the suspender belts attractive or even comfortable. They were inconvenient and, for the most part, we loathed and detested having to wear them. Add to this the regulation school bloomers, made from a thick, unforgiving cloth and, if memory serves, dark brown in colour. Tight elastic at the waist and at the top of the legs didn’t help either. If you happened to have your periods, and being an all-girls-school most of us menstruated at the same time, you then had the belt that held your sanitary napkin in place under your suspender belt and your bloomers over the top. There is no way the bloomers would fit under the suspender belt! The strategically placed hooks, front and back, on the sanitary belt were incredibly uncomfortable.

Lisle stockings also had to have the seams straight. Many times, lining up for chapel, a student would be pulled out of line by an officious prefect because the seams of her stockings were crooked. Somewhere between 1957 and 1961 we were allowed to ditch the lisle stockings and wear nylons instead. Of course the seams still had to be straight. Rules were easily breached and punishment often followed – usually out of all proportion to the misdemeanour. Punishment ranged from demerit points, writing lines, learning by heart the most boring chapters in the King James Bible to whatever else the prefect could think of to humiliate you.

Once, I was caught reading Lady Chatterly’s Lover – although carefully covered in brown paper, I was sprung. At that time the book was banned in Rhodesia but I had somehow managed to get a copy. My punishment was to read one of the chapters aloud to a group of prefects. I do believe, in retrospect, that they were more embarrassed than I was. I’m not sure why the book was not confiscated but it wasn’t and I still have it to this day!

To continue with the trope of memory, memories and remembering, I find this in David Mitchell’s The Thousand Autumns of Jacob de Zoet – a novel I’ve just finished reading and am rereading right away. The slave, Weh, is considering what he ‘owns’ – what he is allowed to own. He knows he is not allowed to own goods or money; indeed, “… a slave cannot even say, ‘These are my fingers,’ or ‘This is my skin.’ We do not own our bodies. We do not own our families”. He ponders the question of whether he owns his own name – not his slave-names – but his true name, the one he tells nobody, “so nobody can steal my name.” Weh muses: Do I own my memories? And comes to the conclusion that, like his true name, his memories are things he owns.

I can’t begin to tell you how much I appreciated this book. It isn’t an easy read, far from it, but so worthwhile. If you do read it, The Bone Clocks is in the same series and also a brilliant book.

It’s the terror you see, the terror of feeling home is going to forget me. Or me forget home.

It is the ‘not-belonging’, the ‘not understanding’. I recollect discovering that the younger boarders (like me) were only to use the washbasins on the left side of the bathroom. An unwritten rule that nobody bothers to tell you until you make the mistake of using one on the ‘big-girls’ side! So insignificant now, but so horrible then.

Then I discovered that if my table manners were bad enough I was made to take my meal to the Boarders Library and eat it there. Oh joy! I’m still not sorry I flicked jelly at the Head Mistress. That, or any of the other naughtiness I thought up to get out of the dining room and into the library!