An entry on Allison’s blog – That elusive pair of jeans reminded me of an incident in my own childhood. Allison writes about a boxing match where she knocked a boy out-for-the-count! My recollection isn’t quite so violent although the outcome was similar.

My father would often let recent immigrants to Southern Rhodesia live in one of the cottages on the farm. I would have been about six-years-old at the time that Bert and Ethel, and their two children, Julie and Tristan lived in the cottage nearest the Big House. Julie, who was a little younger than me, and I became friends. I have a tangled mop of curly hair and I was deeply envious of her long, thick plaits. One day I suggested we play ‘hairdressers’. In her English innocence she agreed. I can’t say I planned the actual deed but, in retrospect, it certainly seems like it. I should imagine the conversation went something like this:

Eleanor “Here, you cut my hair (with these exceedingly blunt scissors)”.

So after some persuasion Julie attacked my hair with the scissors. Of course, having such curly hair there was little or no evidence of the ‘haircut’.

Then it was my turn. I carefully held one of her thick, brown plaits and hacked it off right up near her scalp. The plait came free in my hands just as her mother walked into the room. Oh my! Consternation! With no hesitation I dodged past Ethel and made my escape – through the window – and ran all the way home.

Not long after, I was dragged from my hiding place (under my parent’s bed) and the physical punishment was duly administered. Luckily for me the rest of the story is lost to memory. 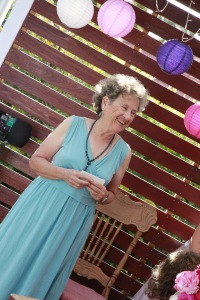